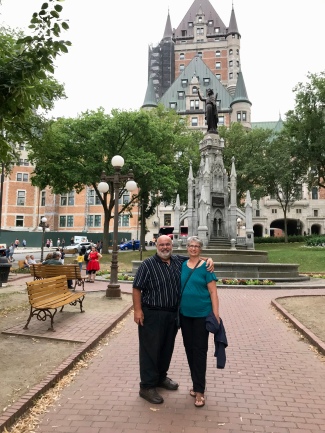 And David and I were off … on another cruise, this one beginning in Quebec City, ending in New York. The plan originally was to rent a car and drive to Quebec City, but Air Canada had $99 fares, too good to pass on. Even when adding in the seat and bag fees, it was a lot quicker and cheaper to fly. My brother generously offered to pick us up at 4:30 in the morning for the ride to Boston’s Logan airport. I don’t know if I could have done the same AND have been so cheerful at that hour. 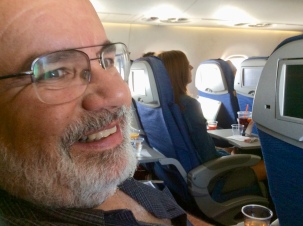 This Day #1 of the trip was David’s birthday, so what could be better than a flight to Canada to celebrate! Plus, we were to meet up with our good cruise buddies, Andi and Ed, and spend a few days exploring the city before we all boarded the Caribbean Princess, a ship we love – and oddly doing a northern route instead of the tropics it was named for. Go figure.Loved the plane on the first leg, by the way. Rows were 2-seaters on each aisle with no dreaded middle seat. I like to think it’s the big weight loss for both of us over the last year, but these seats definitely felt roomier than normal for economy.

We finally arrived in Quebec City after a 3-hour layover in Toronto, and took an hour-long taxi ride in some pretty heavy rush-hour traffic, happily arriving at our destination hotel for a 2-night stay, the iconic Hotel Chateau Frontenac. 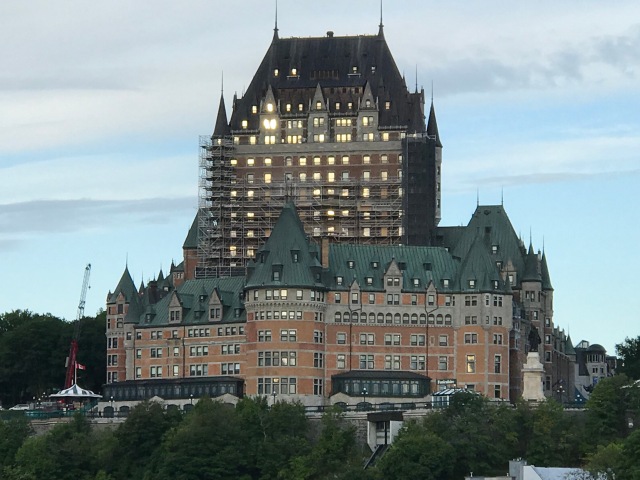 Imagine our joy when the desk clerk at check-in announced that we’d been upgraded to Gold Class, and with that upgrade came access to the VIP lounge with free breakfast and more. The trade off was a room on the scaffolding side of the building being renovated, not a problem if you don’t mind workmen appearing outside your window and loud sandblasting starting at 9 a.m. The only time it was a bother was the last morning when we were re-packing the bags and spent a significant amount of time in the room. Otherwise, this beautiful and magnificent hotel lives up to its expectations, and you can feel the history within its walls. The room was luxurious and classy, though a little dark due to construction apparatus blocking a good amount of natural light. The hotel’s location, however, couldn’t be better for seeing Quebec. In all its glorious state overlooking the city, restaurants, shops and attractions are located just a short walk away, and if that’s not enough, an invigorating hike or the funicular down the steep hill to the Old Town is not far away. 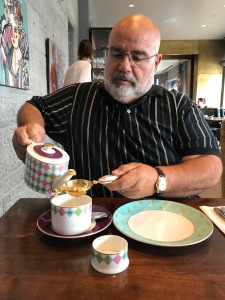 A stay at a classic, historic hotel calls for an activity of equal class, so the four of us signed up for the Frontenac’s High Tea, complete with singer, piano accompaniment, a variety of teas to choose from and delicious finger food served in fine china by a friendly waiter. It was all so Downton Abbey-ish, except with a French flair instead of British. Even my husband, who has never showed any love for tea, seemed to be getting a big kick out of the whole experience!

While we were in town, we took a 2-hour guided walking tour with Tours Voir Quebec for a good overview of the city, starting at the Frontenac, and downhill past Citadel, Place Royale, and ending in the lower old city. The day was not the best, as it was hot, humid and rained heavily nearly the entire trek down the hill. Fortunately, we came prepared with rain gear and enjoyed the tour and the exercise nonetheless. Still, we were tired, wet and not willing to make the steep uphill climb, so we boarded the  funicular and were whisked up the hill back to the Frontenac in just minutes. 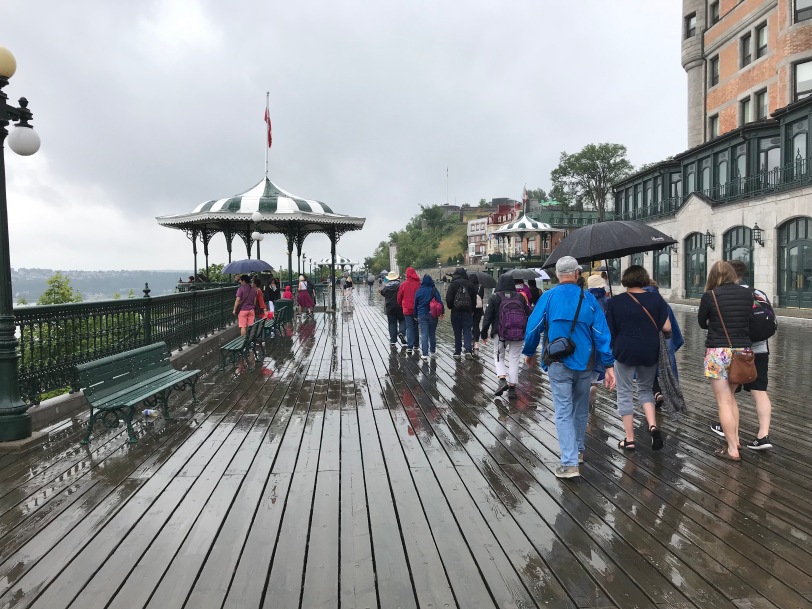 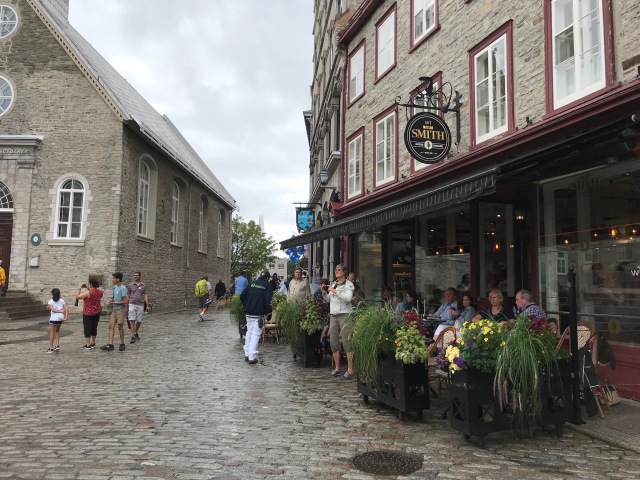 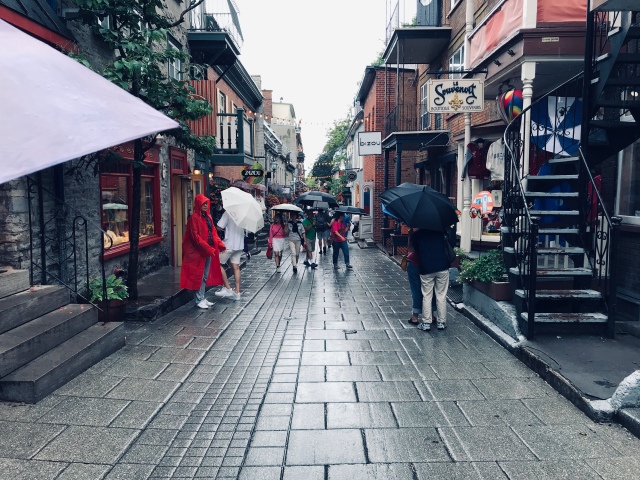 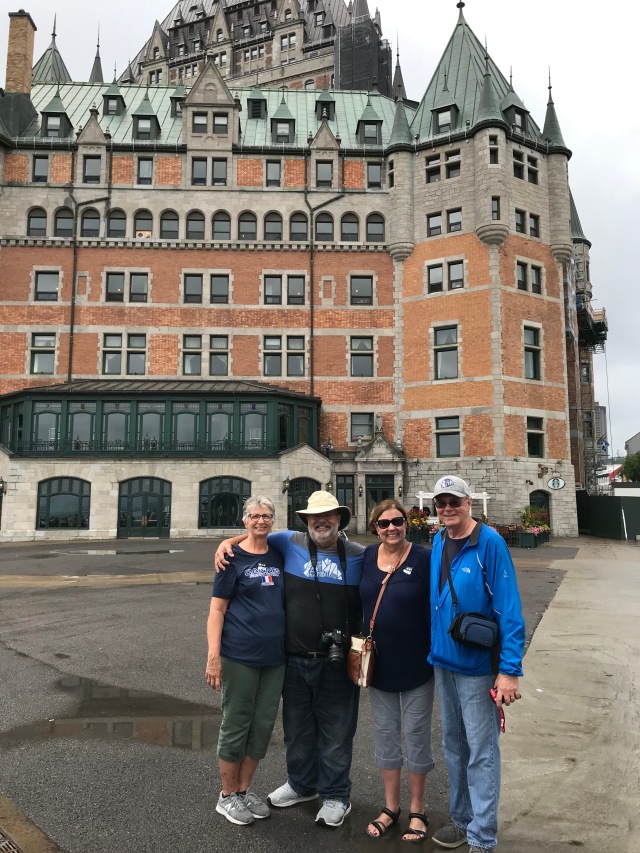 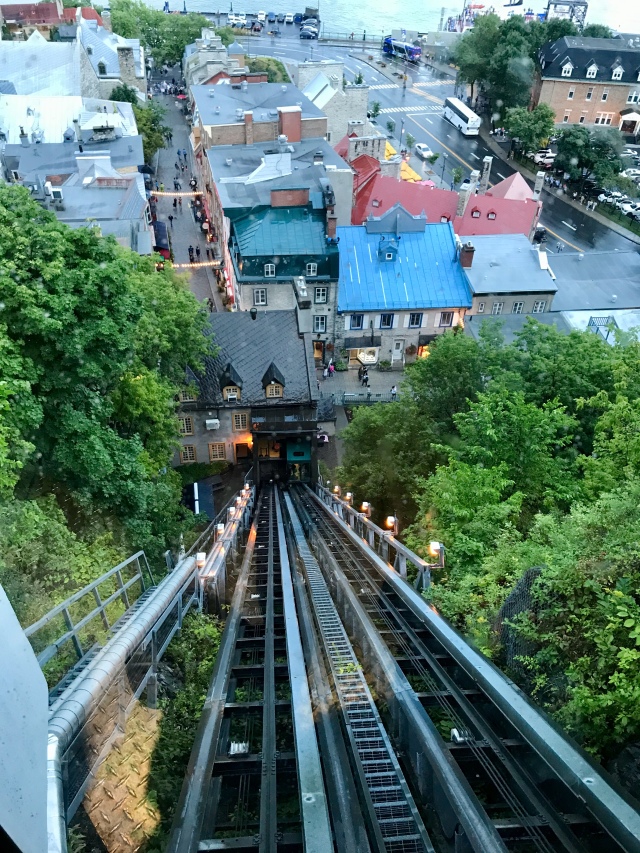 A stay in Quebec City would not be complete without sampling some of the city’s fine cuisine, and our friends Andi and Ed made advance reservations at two of the many cozy bistros in town, Chez Jules and Bistro Sous le Fort. Unfortunately, the outdoor tables were all spoken for in both cases, so we dined inside.

Chez Jules was just a short, convenient 2-minute walk away from the hotel, and like many French bistros, the place was charming, but a bit small and cramped. It was particularly hot and stuffy inside on this steamy, humid night due to the lack of air conditioning. Our waiter, though, was great, had a good sense of humor, and served up some good French fare. To cool off after the meal, we bought ice cream at the shop next door, sat outside and watched the people stroll by.

Better, still, was our meal at the charming Bistro Sous le Fort located in Old Quebec at the bottom of the hill conveniently by the funicular. Ambiance was nice, decor pleasant, and though the bistro was small, it didn’t feel as cramped or stuffy as Chez. Service was great and food delicious and well prepared. I had poutine (fries topped with cheese curds and gravy) for the first time ever (despite my French Canadian roots), and it was good; but, then again, I have nothing to compare it to. 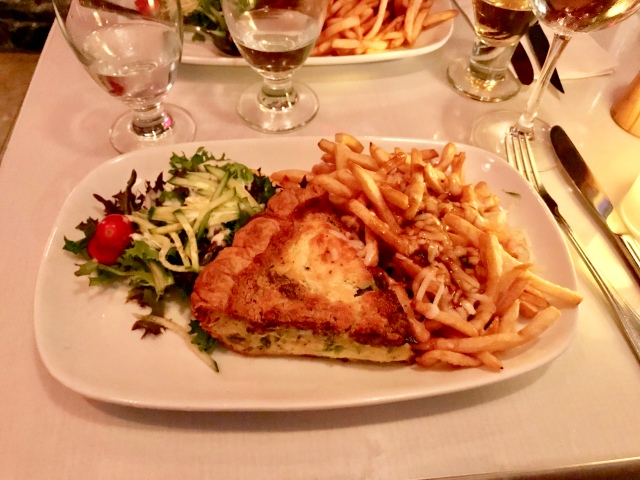 Quebec City is a charming city with an old-France feeling, and we loved walking the narrow cobblestone streets, passing by the outdoor cafes, boutiques and shops and listening to the conversations in French along the way. I definitely would love to return and spend more time here. From the Frontenac we had a beautiful view of the Caribbean Princess on the St. Lawrence river below, awaiting our arrival. 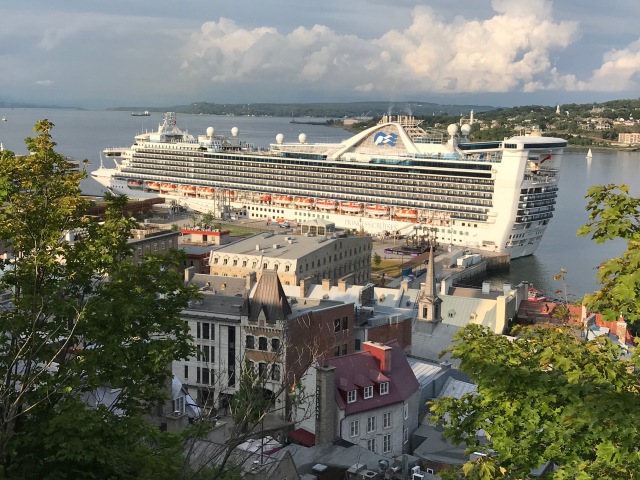 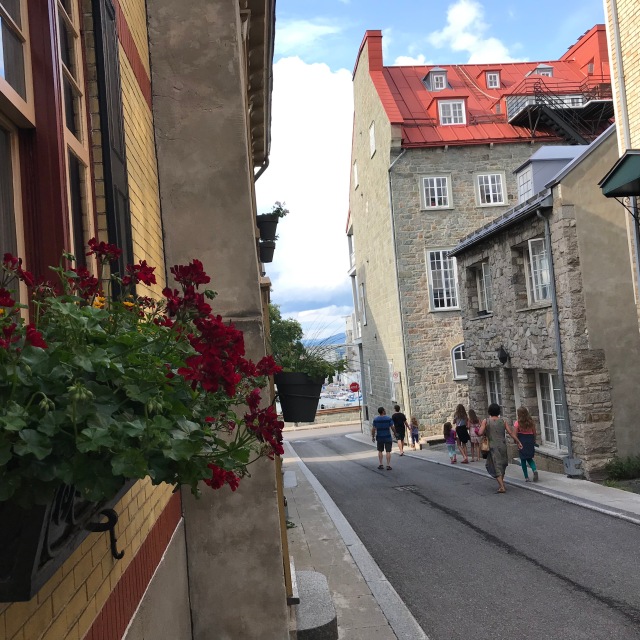 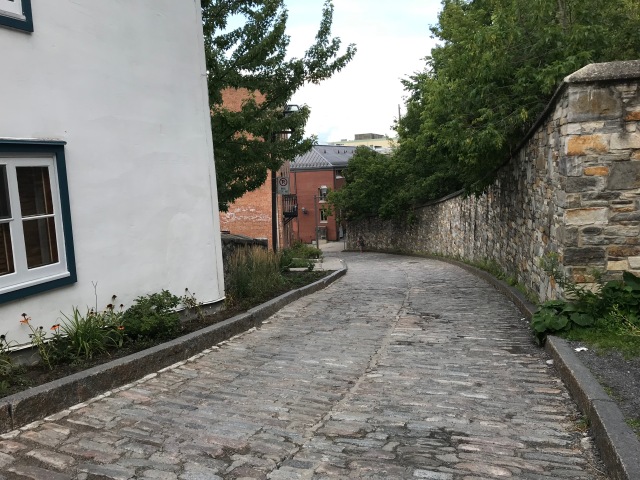